California has spent the last several years in one of the worst droughts in the state’s history. And as if it couldn’t get worse, they are preparing to face one of the worst storms they have had since 1997 – the Pineapple Express. Today I have talked to both of my parents (Northern California area), and have seen several friends that also live in the area posting about the weather conditions on social media. Needless to say the wind is blowing 75 to 100 mph! The dust in the air is terrible and is limiting visibility, and they are preparing for power loss to occur by this evening. Additionally, rain and up to 4 inches of snow an hour may come!

While these conditions are going to be miserable for everyone in the path of this storm, they become more challenging and difficult for livestock ranchers. Ranchers and farmers know that this type of weather can be hard on all animals big and small, but they are preparing as best they can. I want to share with you some of the things my favorite California ranchers are doing to prepare:

– Extra bedding and pens. During a storm like this animals will instinctively huddle together and try to find a place out of the weather. Also, the baby animals will be coming! A change in barometric pressure usually means more baby animals will be born. Shed space can become limited if this storm lasts for several days. But those having offspring will at least be warm and dry.

– Grass hay only! Animals can bloat (excessive gas in the rumen) if fed a high quality hay like alfalfa in windy conditions. Bloat, if not caught in time could potentially kill the animal. So to help eliminate this problem, ranchers are stock piling the grass hay as the primary feed, which almost eliminates bloat altogether.

– Water. Luckily our ranch has an artesian well and several creeks/ditches running through it, so most of the livestock will have water despite weather conditions. However, it is very common for the rural areas to loose power with winds like this, and that means no water can be pumped out of the wells. Water may have to be hauled or the animals moved to ensure everyone has access to fresh water during the entire storm.

– Flooding. Since California has been so dry for so long, a large amount of water may runoff the soil instead of be absorbed. One winter during a severe flooding event, we regularly checked ditches and water blockage systems (aka headgates) to ensure they were not blocked with wood, limbs, and other debris. By allowing the water to keep flowing, and not pooling, it helped to eliminate damage to ditches and headgates.

– Structures. This type of wind can be hard on structures, especially old ones and the roofs. Some of our old sheds have tin roofs. In the past, tin has been flopping around and eventually blew off as it is way too dangerous to try and fix it in a high wind event, as someone could easily be decapitated or severely injured. When part of a roof starts to flap around we try to throw tires or other heavy objects on the roof, and hope it makes it through the worst.

– Fires. One winter we lost several sheds and a part of our working corral (livestock handling area) due to an electrical fire. If an extension cord is plugged in for whatever reason, and the power goes it can cause a spark. And with high winds it doesn’t take long before you have a roaring fire on your hands with no ability to pump water. So my Dad has been checking to ensure everything nonessential is unplugged. All of neighbors try to watch out for each other for fires that may also start at feedmills, haystacks, and other structures.

– What can blow away? In winds of up to 100 mph anything that can blow away will blow away. Even livestock/horse trailers! Ours are filled with straw, which helps weigh them down, but there have been times the tractors were used to help anchor them down. A reality is those trailers can be blown over fairly easily with wind like they are now having. We have also had portions of haystacks blow down, various trash cans, and basically anything that isn’t weighted down or tied down blow away (eventually recovered at a fenceline). This can be a very dangerous situation for human and/or animal.

– Trees. Cottonwood trees grow well in their area, they offer shade, and can get very large. Several years ago, my parents decided to cut down the ones near the house as it posed a huge concern that they could blow over in a high wind event and destroy the house and anyone in the house. Trees near any structure in a high wind event should be monitored, as they pose a serious concern.

– Transportation. If the amount of snow comes that they are predicting, transportation will become very difficult if nonexistent for a couple of days. Growing up in the mountains you learn how to drive in bad weather at high altitudes and to appreciate a set of chains and an emergency winter kit (i.e. water, blankets, snacks, clothes, etc.) for your vehicle. You also know what it means to stay home if the weather gets too bad (I mean that is where the Donner Party passed through!). You also make the most of your shopping trips, stocking up on plenty of food and water in case you aren’t able to get out for several days.

– Loss of power. As I mentioned, it is not uncommon for my folks to loose power in a severe storm. However, this presents some real challenges. Luckily in our area wood burning stoves are the norm, so heat is provided. Everyone has a generator to rotate between freezers and refrigerators. And it is kind of like camping – salami, cheese, crackers, and a cold beverage is on the menu!

This storm will not be a walk in the park, but by preparing now it will make things easier as the storm continues to pound the area with wind, rain, and snow. While this storm is daunting, the thought of moisture is exciting – as it is desperately needed.

I have blogged about cold weather animal care, preparing animals for severe weather, and preparing for a disaster.

What do you do to prepare for severe weather events?

I can’t believe it is already the middle of August! Where has the summer gone?! I feel like mine was spent dragging a suitcase through an airport, where I got more sleep on an airplane than I did in my own bed. The good news, I have a ton of posts in my head, I just need to get them down here!

One of my job responsibilities is to provide the Saunders County Livestock Association members with an annual agricultural tour. This was their 56th annual! Pretty amazing that there is that much history and tradition within this county based association. It is also tradition for the Extension Educator who does the tour to take them to their “home” area, for me that is Western Nevada and Northern California.

I had 43 men sign up for the tour (the women stay home and supposedly have their own vacations while the men are away); good thing I am tough and can handle that much testosterone! Since we were flying, I had planned a six day, five night adventure out into the Wild West. We traveled via planes, boats, and buses 🙂 Below are photos from our recent trip. This was only my second tour to plan, but oh what a learning experience these have been!

You would think that since these guys see and deal with agriculture everyday, they would not want to see more of it when on vacation. But that is further from the truth – they love to see what other farmers and ranchers are doing across the county. I hope you enjoy this recap as much as the guys and I enjoyed participating in the 56th annual trip!

This tour was especially important to me, as I took everyone “home” to see the area I was born and raised in. It was very interesting to see things through 43 other sets of eyes. These tours are a lot of work, but they are also a lot of reward to see them come together.

I have heard many of the Livestock Association members reference how great the trips were when the other Educators prior to me took the group “home” – so I had big shoes to fill! I think all of the guys really enjoyed it, and it will be one they talk about for years to come. P.S. – my Mom was already invited to hop on the bus again next year!

If you would like more information about any of our tour stops, tips for planning a large tour, or are interested in participating on a farm/ranch tour – please let me know.

You can also find me on: 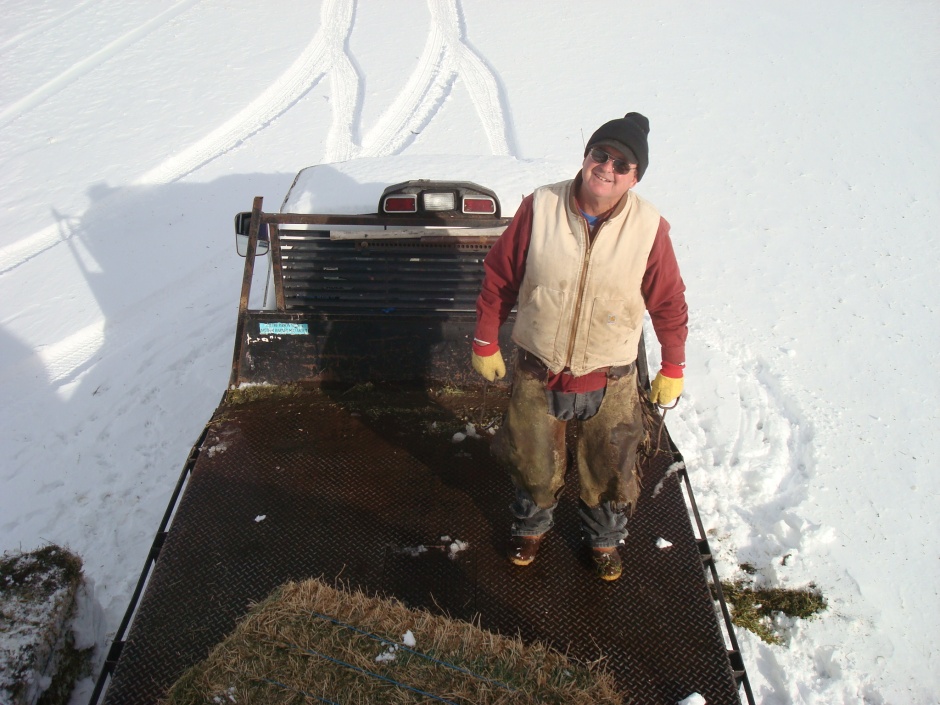 As we approach the holiday season I always get anxious to head West to see my family. I am originally from Northern California, in the Eastern Sierra Nevada Mountain Range area, yes we get snow and it is cold there.

On this brisk Northern California morning, my Dad, Les, and I were loading hay. Ranchers and farmers work hard in the rain, snow, sleet, and hail on weekends, holidays, birthdays, and after 5 p.m. to take good care of their livestock! 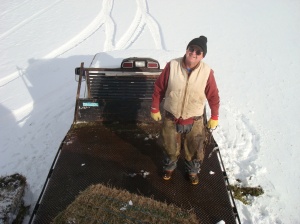