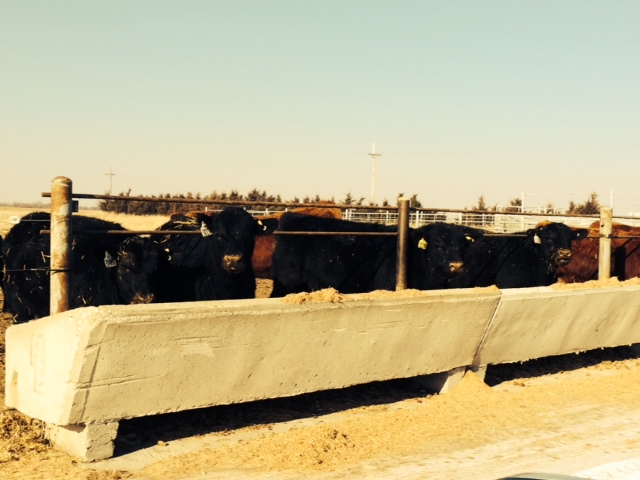 Recently, I did a series on meat labeling terms. Grain-fed and grass-fed, organic and natural programs, and no hormones and no-added antibiotics.

Blog reader, AW, left this message: The grass vs. grain article and follow up, while touching on things most people don’t know, seems to avoid the most common issue in consumers’ minds: Thinking that grain-fed cattle must be given antibiotics because they are not “built” to consume corn, and that this contributes to antibiotics resistance.

Now before you read this I should tell you that even though I am definitely pro-Ag, but I am very against the misuse and irresponsible use of antibiotics! I very strongly believe that if/when antibiotics are needed and used, that they are administered judiciously with great responsibility. In many cases, when an animal becomes ill enough to need an antibiotic, it is life and death. If the animal does not receive the antibiotic it may suffer and die! So it is the responsibility of the livestock farmer to ensure an animal receives a quick diagnosis and the proper treatment! Just like you, I do not want to eat meat, or consume other livestock products where the withdrawal period was not followed! I think AW makes a good point. Many people are concerned about antibiotic resistance, and becoming resistant to antibiotics through the meat they eat. So let’s take a look at the facts and gain a better understanding of antibiotic resistance together.

South Dakota State University Extension put together a nice antibiotic fact sheet. Antibiotics are given to people and animals to treat or prevent illnesses caused by bacteria. Antibiotics are given to livestock to relieve the pain and/or distress from the illness, to make them feel better, and recover. Just like with people, antibiotics have no effect on diseases caused by viruses or parasites. Antibiotics can be administered several ways, including an injection under the skin, via a pill (aka bolus), or mixed in the feed or water. When an animal is very sick an injectable antibiotic is the quickest route to get the animal on the road to recovery. It should also be mentioned that if animals are sick, like us, they don’t feel like eating or drinking, so mixing an antibiotic into the feed or water is not always effective. All livestock antibiotics approved by the FDA (Food and Drug Administration) since 1988 require a prescription from a veterinarian who has developed a relationship with the livestock producer and can help determine the best options for disease prevention and treatment. Feedlot co-owner and operator, Anne Burkholder of Will Feed, Inc., Cozad, NE, exemplifies what a responsible antibiotic user looks like in this blog post on Feedyard Foodie.

A common myth is that antibiotics are mixed into ALL livestock rations. That is untrue. There are certain times in an animal’s life where things are more stressful than others, and antibiotics in the feed can make good sense. For example, if animals are co-mingled at a young age they are more likely to transmit bacteria back and forth (just like your kid’s daycare or school classroom). It is hard on their little bodies, and being sick can take a toll on them and make recovery harder. Also, when animals are weaned from their mothers there can be a lot of stress. High levels of stress often result in weakened and susceptible immunity which opens the door for bacterial infections. Weather conditions may also take a toll on livestock. Extreme fluctuations in temperature and the inability to get dry or warm can result in illness or pneumonia. Finally, as an animal approaches its final weight, antibiotics may be fed to help prevent liver abscesses, which may be caused from a high ration of grain in the diet. (I believe this is what AW was referring to, and I will elaborate more).

The use of antibiotics in feed or water is totally at the discretion of the livestock farmers. Some beef farmers do not feed antibiotics during these times of stress, and will just treat animals that may get sick, and some may treat all the animals to keep them all healthy. Also, animals that are fed for a niche market (i.e. organic, naturally raised, or no antibiotics used systems) will not have received an antibiotic (in these programs if they receive an antibiotic, then they are completely removed from the program). Geographically, there are some locations in the U.S. (Midwest – Iowa and Eastern Nebraska, South Texas, and Desert Southwest – Arizona and California) that feed fewer antibiotics in the feed because of a diet higher in roughages and fewer fluctuations in weather. There is no right or wrong method, each beef farmer weighs the advantages and disadvantages of the cost (antibiotics are expensive to manufacture and purchase), labor, time, efficiency, withdrawal period, and animal’s health to make a decision that is best. And just like people, some animals can handle stress better than others. Some animals may never get sick, while others may get sick multiple times.

Let’s talk more about cattle being fed antibiotics to control liver abscesses. Liver abscesses are caused by grain intake and consumption; these high energy diets require intense feeding management and can be associated with acidosis. A liver abscess is caused when cattle have an episode of acidosis. Acidosis is the most common nutritional disorder in the feedlot and can occur when cattle are fed high amount of grains in a short time, or when cattle overeat (regardless of the feedstuff). This results in the production of more lactic acid than can be buffered by the rumen, water from the circulatory system is drawn into the rumen, resulting in a change in pH. Dr. Dee Griffin, DVM (Doctor of Veterinary Medicine), says there are many reasons cattle overeat, but one of the more common reasons is a decrease in barometric pressure. Cattle can sense a storm coming, and will eat more than usual, if that diet is high in energy (i.e. grain) it may result in an acidosis event. Dr. Griffin says that when the pH in the rumen falls below five, certain bacteria can cross the rumen into the liver resulting in a liver abscess. To help control the abscesses, an antibiotic called Tylan can be fed to cattle in their feed.  It is estimated that at least 75% of cattle in feedlots are fed Tylan. Tylan helps reduce liver abscesses by 40-70%! As I mentioned above, this is an individual beef farmer’s decision.

Stay tuned for Part 2 of the Antibiotic Resistance discussion…