Last week I mentioned ruminants. Ruminants include cows, sheep, goats, llamas, camels, deer, and many, many more. As I mentioned they also chew cud (which is a chunk of food they regurgitate and chew again breaking down the particle size; this process is called rumination – but more on that later ).

Most people often believe that ruminant animals have four stomachs. That is not entirely true, they have one stomach with four compartments. In the photo below you can see the four compartments: Rumen, Reticulum, Omasum, and Abomasum – each one has a different role, but I will go more into that later. 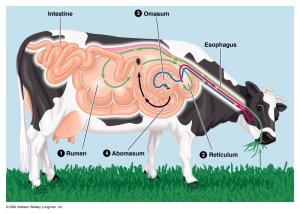 And this, ladies and gentlemen, is why ruminant animals can eat grass and hay and humans can not (we are monogastrics).